While most of the news from Tuesday’s exclusive Apple event in the Bay Area will focus on the new phones being launched (one with three cameras to boot) and a new, $4.99 streaming service, the California company also made some healthcare news.

Continuing its foray into healthcare, Apple announced that it will take part in three large medical studies. They will focus on women’s health, the relationship between heart and mobility to hospitalizations, falls and other adverse events as well a study on hearing health and what factors affect it.

“Today’s announcement carries our commitment to health even further by engaging with participants on a larger scale than ever before,” said Jeff Williams, Apple’s chief operating officer, in a statement.

The studies will be available on the new Research app which will be available to be downloaded for free in the U.S. later this year. The goal is to help academic medical institutions, healthcare organizations leverage the Apple products customers already use to contribute toward medical research. 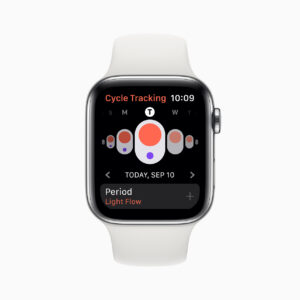 For the women’s health study, Apple will be partnering with Harvard T.H. Chan School of Public Health and the NIH’s National Institute of Environmental Health Sciences (NIEHS). The three have collaborated to create what Apple is billing as the “first long-term study of this scale focused on menstrual cycles and gynecological conditions.” The study will help to screen for and assess the risk that women have of developing conditions like polycystic ovary syndrome (PCOS), infertility, and osteoporosis while also looking at pregnancy and menopausal transition.

“Women make up half of the world’s population, yet even today there has been limited investment in studying their unique health needs,” said Michelle A. Williams, a reproductive epidemiologist and dean of the faculty at the Harvard T.H. Chan School, in a statement. “This study, unprecedented in scope, will greatly advance our understanding of the biological and social determinants of women’s health, and lead to better health outcomes.”

For the heart and mobility study, Apple will join forces with Brigham and Women’s Hospital and the American Heart Association on another large study of how heart rate and how mobile a person is can relate to hospitalizations, falls, heart health and quality of life. The mobility signals include the pace of a person’s walking and flights of stairs climbed. The goal is to promote healthy movement and better heart health.

“We are collaborating with Apple and Brigham and Women’s Hospital on the Apple Heart and Movement Study to explore the correlation between a broad range of physical activities and a person’s overall heart health to ultimately understand risks and interventions to improve health,” said Nancy Brown, CEO of the American Heart Association, in a statement. 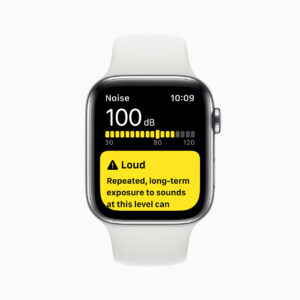 The third study will evaluate the factors that determine hearing health. For this, Apple will work with the University of Michigan, to create what it describes as  “the first of its kind” study to “collect data over time in order to understand how everyday sound exposure can impact hearing.” The announcement noted that the study data will be shared with the World Health Organization (WHO) as a contribution to the organization’s Make Listening Safe initiative.

While the announcement repeated the fact that these studies would be large-scale, there was no estimate available about the number of people that may participate. A spokeswoman for Apple didn’t respond to an email query.

But if the Apple Heart Study, where Apple teamed up with Stanford University researchers to see if the Apple Watch could detect potential problems and alert people before they became full-fledged, is any indication, the studies could be massive. The preliminary results of the virtual Apple Heart Study – which enrolled more than 400,000 participants — found that the wearable could be used to detect irregular heart rhythms that could be a sign of the much more serious condition: atrial fibrillation.

The full study has not been published.

Apple’s first venture into medical research with the ResearchKit and the CareKit.

Putting patients at the heart of a digital hospital

This week’s cartoon: Is anybody listening?

Fitnesswiseguide is your Fitness News website. We provide you with the best and latest Fitness News articles and videos from around the world in one place.
Contact us: nichesitesmarketplace@gmail.com

Is HIIT or Weights Better For Fat Loss?

© 2019, All Rights Reserved Design by NichesitesMarketPlace